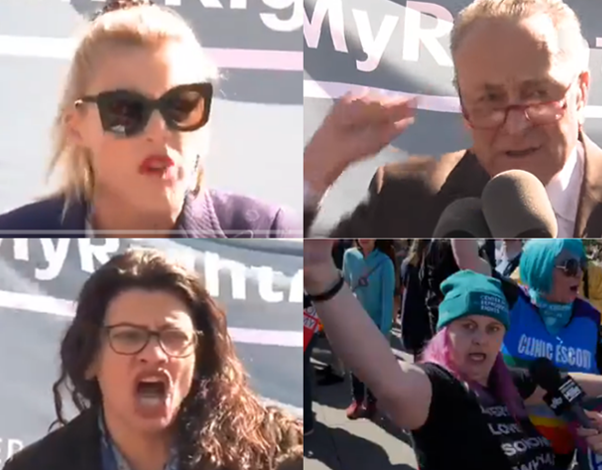 Y’all, liberal feminists encouraged my anti-feminism long ago. But, this week’s behavior among the pro-abort feminazis has reached peak insanity, to the point where I feel sorry for them and their hate and anger.

Take some Midol and call your shrink in the morn.

First, we have actress Busy Phillips at a pro-choice rally in D.C., screaming about her obsession with abortion and how the abortion that she had when she was 15 years old is what enabled her acting career. You guys, she’s crazy angry — so much it seems like she’s hyped up on something that causes her to lick her lips severely. Maybe anger does that to a person? Not sure, but it is clear that her anger possesses her.

This was all at the same rally where Crying Chuck Schumer threatened two SCOTUS judges if they didn’t vote the way he wanted them to on abortion and a woman’s right to choose. He’s not a woman, but Schumer is an angry feminist too.

Second, we have Rashida Tlaib, who is screaming out loud at all those pro-life men who want to have sex with her, I’m pretty sure that number of men adds up to zero, so maybe she should calm it down a few notches. She’s obsessed with making sure people know to leave her body and her choice alone. But um, a full-term baby born alive and left to die across the room…that’s not your body, honey. That’s not healthcare; infanticide is murder.

“Maybe you shouldn’t want to have sex with me.”

Pro-life men do NOT want to have sex with you!https://t.co/XF2QAkXKeTpic.twitter.com/h4tR6g6PAW

Saving the best for last, we have this pro-abort who has chosen to have no children in her lifetime. Kudos to her for her choice – it’s a free country. The question for her is, what about preventative birth control? Because that’s what women’s healthcare is, abortions are not healthcare. But as their hero, Obama once said, “God Bless Planned Parenthood.” Because of Planned Parenthood, we have a generation of feminists who are seemingly brainwashed to be anti-preventative-birth control and full-on pro-abortion. With Planned Parenthood’s abortion access, why should they force themselves to be accountable with birth control? If they get pregnant, no problem – abortion is the be all end all to these women. When asked a question about alternatives to abortion, full-term abortion, or infanticide, watch this woman who is proud of her three abortions lose her mind:

Feminists outside the #SupremeCourt celebrate abortion while wearing earrings with alligators eating babies.

Grab a Snickers ladies; you’re all way too hangry.